Activate the reward center of your brain 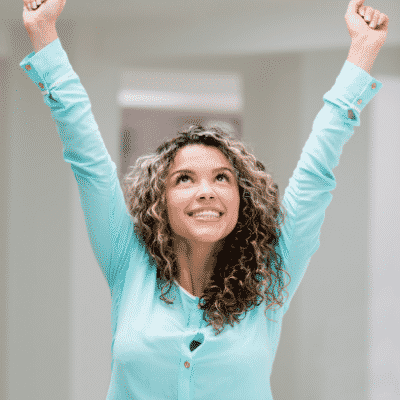 Positive reinforcement is a powerful tool when it comes to human behavior. And while success brings some obvious psychological motivators, there is some specific chemistry that occurs in your brain that reinforces those good feelings.

Recall that we have access to more drugs in our brain than any drug company could ever make. There are four primary chemicals (neurotransmitters) in our brain that affect happiness: serotonin, dopamine, oxytocin, and endorphins. Today we’ll discuss dopamine.

Dopamine is a neurotransmitter that causes that happy feeling when someone gives you a compliment or acknowledges you with a smile. You also release dopamine when you succeed at something. Dopamine is part of the reward center of your brain.

Dopamine can make it hard to quit unhealthy behaviors, too

When dopamine is released in large amounts, it creates feelings of pleasure and reward, which motivates you to repeat a specific behavior. On the other hand, low levels of dopamine are linked to reduced motivation and decreased enthusiasm for things that would excite most people.

Nicotine also causes the release of dopamine, which is one reason people become addicted to smoking so easily. It temporarily makes them feel good, and that’s why it’s so hard to quit. The extra release of dopamine encourages them to repeat the specific behavior. However, the dopamine happiness from nicotine is short-lived, but this helps to understand why people struggle so much when they try to quit.

Of course, smoking and nicotine have very negative effects on your health. Thankfully, there are plenty of other healthy ways to increase your dopamine levels without smoking cigarettes.

There are a variety of easy and natural ways to increase your dopamine level. Here are a few suggestions:

Eat enough protein, especially protein containing the amino acid tyrosine, which is in foods like turkey, beef, eggs, and legumes. As an amino acid, tyrosine plays a critical role in the production of dopamine, so having good amounts of foods with tyrosine can help.

Also, eat less saturated fat in large quantities. Foods such as butter, animal fat and full-fat dairy may reduce your dopamine levels. Consume these in moderation.

Using probiotics can help. The gut and the brain are closely linked, to the extent that the gut is sometimes called the second brain. The gut and brain produce and respond to many of the same neurochemicals, including serotonin, and dopamine. Having a healthy gut is important when it comes to releasing more dopamine.

Movement helps us produce more of the good-feeling chemicals in our brain. Frequent or regular exercise generate improvements in mood. This is why you can elevate your mood with as little as 10 minutes of aerobic activity.

Rest and music join in the feel-good parade

Getting regular restful sleep may keep your dopamine levels balanced and help you feel more alert during the day. You probably notice that you feel better the next day when you have slept well, versus tossing and turning or being awake much of the night. Getting a good night’s rest may help regulate your body’s natural dopamine rhythms.

Listening to music increases activity in the reward and pleasure areas of the brain, which are rich with dopamine receptors. Listening to your favorite instrumental music may boost your dopamine levels.

Mindfulness and meditation – the process of focusing so intently on something that the mind chatter falls away – is another great way to increase dopamine and improve your well-being.

Periods of low sunshine exposure can lead to reduced levels of mood-boosting neurotransmitters, including dopamine, so it follows that sunlight exposure can increase them. Sunshine also increases your vitamin D level. Sunlight exposure can boost dopamine levels, but always be mindful of sun exposure and take precautions to avoid skin damage.

Our body requires several vitamins and minerals to create dopamine. These include niacin, folate and vitamin B6. Most of these can be found in a good multivitamin/mineral.

Give your brain what it needs to help you feel good

Dopamine is an important brain chemical that influences your mood and offers feelings of reward and motivation. Boost your dopamine levels by maintaining a balanced diet, getting enough sleep, exercising, listening to music, meditating and spending time in the sun.

Your action step is to see what you can do to balance your dopamine level and enhance your well-being.

Bonnie Groessl is a best-selling author, podcast host, holistic nurse practitioner and success coach. Her mission is to educate, empower and facilitate your well-being while nurturing the mind-body-spirit connection. You can find links to her books, guided meditation audios, blog and podcast at www.bonniegroessl.com